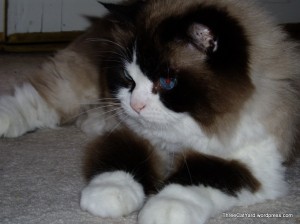 After the disturbance of the haircut and the vet visit, I thought it would be best to take things a bit slower.  So for the remainder of that week I just split time in her room with her and in the rest of the house with the boys.  There were a few times when I heard Julius meeping outside the door, but Calpurnia didn’t react to that.  When I came in to read, she would come down from the shelves, rub against my legs, and come close to be petted.

Soon it was time to expand her world. My house splits naturally into upstairs and downstairs. At times I would let Calla out into the upstairs when I knew the other cats were downstairs, and she soon explored all of the rooms. The situation couldn’t last, and soon there were some collisions in the hallways with the obligatory hissing.  After getting hissed at a few days, Calpurnia got tired of it, and charged Gus after he hissed at her upstairs. He was so surprised he fell over backward, and she chased him to the stairway.  She was putting out a claim to the upstairs as her turf. Seeing a 7 pound cat chasing one twice her size was a funny sight. Soon she had both boys minding their manners upstairs.  Julius got a lesson a day or so later when he followed me into the isolation bedroom, and spat at her. She charged him and he vaulted the couch, but she turned and met him coming around the other side and made him reverse his field again and again. Finally after knocking over a lamp and some books he escaped, a little wiser about how to handle little Calla in her rooms.

So things stood or a week or so. I was still closing the room in the mornings when I left for work, but opened it up when I got back. Calla pretty much stayed upstairs, and if the boys were polite she would let them come up there too. 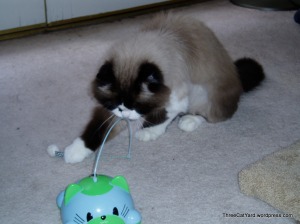 So the next step was to mix them in the same room, so I would bring Calla down to the main room to play. I brought out a silly little motorized cat-mouse toy that can move and erratically flops a fishing pole with a toy mouse on it.  She seemed to enjoy it. 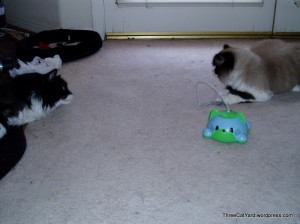 Gus was watching pretty intently, but behaving well. I caught this little nose to nose moment. 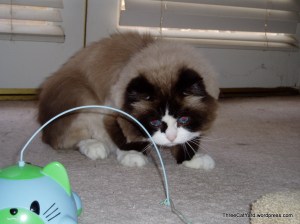 Then Calla went back to the mouse.  This was about a month since I brought her to the house, and things were going well. Calpurnia was still being fed in her original room, but the door was open all the time now.  She only rarely came down stairs on her own, but would remain there if I brought her down for a visit.

Engineer with Cats
View all posts by Oldcat →
This entry was posted in Calpurnia, Cats, Gustavus Adolphus, Julius Caesar and tagged Cats. Bookmark the permalink.