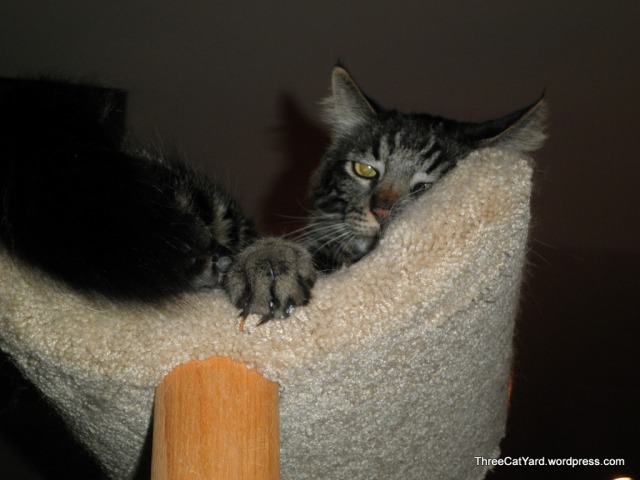 Most of the time after spending a lot of the afternoon and evening wandering, Julie is content to rest for the night.  In fact a lot of the time he looks so tired you worry he is overstraining himself because he lies flat out on the coolest part of the tile floor and sometimes even pants for a minute or two.

Not last night, though. He came in and settled for a bit and then went right back to the door about 5 minutes later.  I told him he wasn’t going out, and shooed him away, but that didn’t sink in last night. So he went in to “stoopid owner” mode and demonstrated how to open the door.

He stands on his hind legs, stretches out and puts his paws on the shaft of the doorknob and moves them up and down alternately. It’s really a perfect demonstration of the mechanics, and I’m sure the meows he makes are helpful as well, if I could only understand them.

I tried to get him to play with a toy, but no dice.  And when I went off to do something else he upped the ante by standing on the blinds covering the door, which makes a big rattling noise.  If I chased him away he would flop in front of me, but then would go right back.

I had to break the cycle or go nuts, so I went up to the spare room to read.  It was like he never had been there before in his life. He was prowling around the room like a panther, jumping up on shelves and down into the corners.  Then he would leave for a few minutes and do it all again.  One of the times Calpurnia had come up and was sitting on the back of the little sofa in there, and Julius did his trick of leaping up to that same spot without looking.  I love the contrast between his hyper aware cat on alert act and the total shock on his face when he finds a 10 pound cat where he doesn’t expect there to be one.

Engineer with Cats
View all posts by Oldcat →
This entry was posted in Cats, Julius Caesar. Bookmark the permalink.