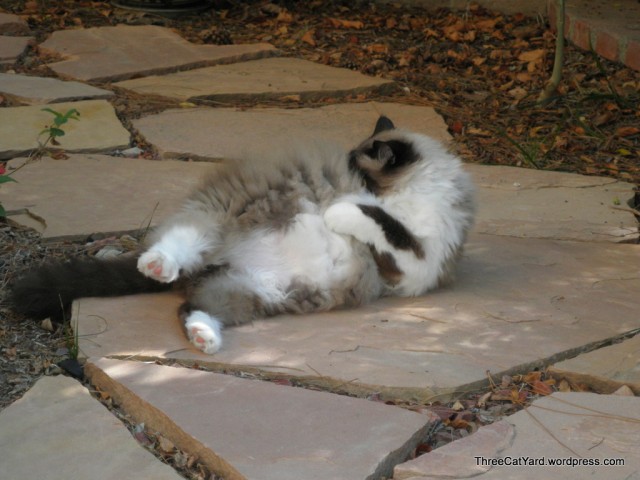 Now you can see how Calpurnia keeps that figure.

She really likes the back yard, especially that particular rock. Inside it would be very hard to get that tummy shot, as she tends to curl up or lie upright.

Something interesting happened this morning. Calpurnia was upstairs in a small cat tree by a window and I was in a nearby room. I heard her make a different kind of meow than usual and she was out of her basket with her nose up against a window. When I came up she looked at me and gave a few more odd sounding meows.

Obviously she had seen something, and it was gone. I turned around and Gus had entered the room after me and was sniffing around the other parts of the room looking for something. Not the window, but the rest. I then saw Julius go by the door down the hallway. He was also looking around the hall and the other rooms upstairs. He looked for all the world like a cop entering a room where a gunman was reported – alert, checking all the corners, not afraid but purposeful.

The only thing I can think of is that Calpurnia told them that she saw something and it had ‘gotten away’ in the area, so everyone was looking for it. The other two never saw it themselves, they weren’t even in the room at the time. In fact, Julius never even saw Calpurnia.

3 Responses to Work those Abs!