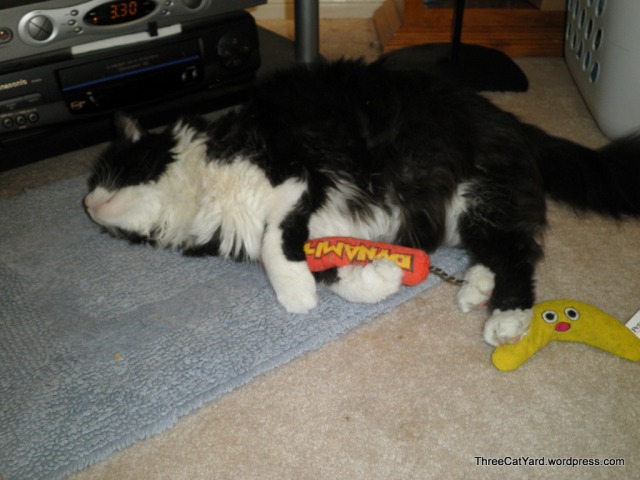 Every once in a while someone ventures into this part of the room and rediscovers these cat toys. Its strange, wherever I put them the cats tend to avoid, but if they happen to go there they react like these guys are the best toy ever. Then they don’t come back to the spot. Odd.  Here Gus has rediscovered it, and is wallowing in them both.

I have a second firecracker toy that has had the color licked off and the fabric almost rubbed away. Most of the time some Gus or Calpurnia is sitting right on it, even though its more than a year old.

It’s a catnip night, because Julius was getting too anxious about getting outside again after he came back in.  It worked for a little bit, but now he’s trying to pry open the drawer instead of enjoying what’s been pulled out for him.  Maybe that will calm him down.  I would use the cool feather teaser I have, but he pulled the head off of it the other day.  Most cats get the feathers one by one, but that’s too slow for Julie. He broke the handle holding the entire cluster off.