Question(s) of the Day: Pixie-Bob Wars and Manx Syndrome 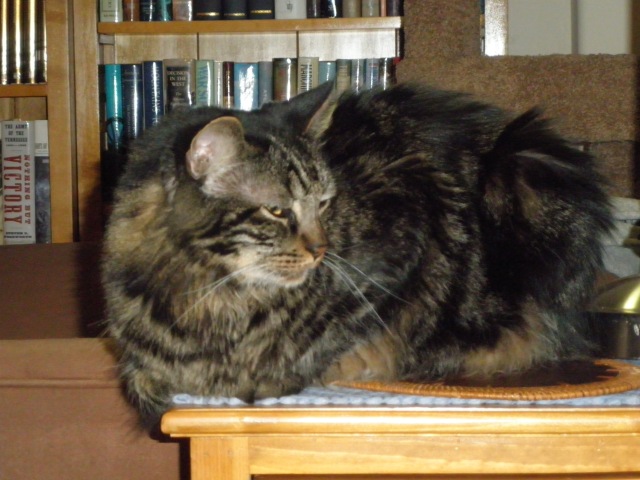 Kerry asked last time for more information about the Pixie-Bob breed, which is another type of American bobtail. There is actually a third – the Tennesee Bobtail.  All three seem to be Manx variants and thus subject to the same health issues.

If you read up on Pixie Bobs, they talk a lot about supposed ‘Legend Cats’ that were supposedly wandering the land before Columbus.  Now, these don’t appear to be the same as the Bobcats and Lynx that were wandering about.  And since domestic cats were introduced from Europe much later, they seem to deserve the Legend status. It sure sounds better than ‘Made Up Cats’.  And whatever cats were wandering about the East coast, I’m not sure how they got to the Pacific Northwest, where the true founders of the Pixie Bobs were found.

Even more than the American Bobtail, the ‘purpose’ of the Pixie-Bob breed was to make a cat that looks like a Bobcat.  In fact, in looking up stuff for this post I found a site by the founder of the breed.  One of the pages was a very interesting zillion word treatise on how the American Bobtail breed wasn’t supposed to look ‘wild’ and how the recent addition of this was a travesty and was horning in on their act.  It was a great combination of Internet Flame war and Crazy Lady fight.  I suppose it is not shocking that when you take super-intense pet owner feelings and add kittens and then a whole race of cats to it in addition things can get somewhat out of hand.  The saga of the Ragdoll and Ragamuffin breeds is another good example.

The facts seem to be that a few ‘bobcatty’ cats were picked up by the founder from a farm that had a wild look that she liked and wanted to develop. They had the bobtail, and were also polydactyl.  Now, I don’t see why a bobcat mix should have extra toes, but this was considered to be a feature not a bug, so extra toes still occur instead of being bred out.

As to the wild genes, the poor Pixie Bob breeders have to walk a fine line here.  “Wildness” makes a breed sexy to a lot of owners and thus it is good business to play it up.  On the other hand, governments have a funny way of not liking wild animals imported and released into their towns and cities.  So if they play up wildness too much, they get banned.

The facts are that there are no wild genes in the Pixie Bob, it is just a selected ‘look’ to try and mimic a wild cat.  The Ocicat is supposed to look like an ocelot, some black cat breeds are supposed to look ‘panther’ like, and there is even a ‘Toyger’ breed that is intended to look like a Tiny Tiger.  To me, they just are expensive tabbies.

One odd thing I also found is a lot of warnings about vaccines being fatal to these breeds.  I don’t know if the line is very sensitive to problems in reality or if the breeders are over-reacting to a few sad accidental reactions.

I did find this link to a page comparing the features of different bobtail breeds. Yes, there is a ‘Siamese bobtail’ out there.

SC Amy added a question about the frequency of problems with tailless Manx cats and I did find an interesting resource on Manx Syndrome.  It is pretty alarming stuff. Now, this is from a medical side and might be erring on the side of caution, but statistics saying that 16 percent of Manx cats in a sample showed abnormalities, all rumpies, is alarming.  I don’t know what the proportion of rumpies in the population of Manx cats is, but even if it is as much as half that means that a third of the rumpie population has or will get some kind of defect.  And this is after the really serious, fatal defects die in the womb.

I will say that it does seem that the bobtail breeders are trying to shade things to the side of safety, more than the Manx.  In the Manx, the rumpie is preferred. In the bobtails, the rumpie is an accident that is not bred.  By even by trying to select for a midrange tail the rumpies can be made more rare, but not entirely eliminated.  The range of tail sizes is too wide to be sure you will have no problems, and it is not necessarily true that only rumpies can have problems. For example, I also did find that the bobtails are sometimes subject to painful arthritis in the malformed stump of a tail.

I have some sympathy for the desire to keep alive the aboriginal Manx cat population despite the trouble it causes. I don’t see why the newer breeds need to follow suit. If you want to make a cat that reflects the bobcat, why not start with a  Japanese bobtail and its ‘safe’ bobtail mutation and work on appearance from this starting point?  You could always make up a legend that one of the bobtailed cats migrated through Alaska to the US.  It is about as believable as the ‘Legend Cats’.

9 Responses to Question(s) of the Day: Pixie-Bob Wars and Manx Syndrome