As I said yesterday, the first week was pretty crazy for Calpurnia.  After a rough belly shave and vet visit on the way out of the shelter, I knew that she would have to get another haircut before the visit to my own vet in that week.  And since I was working all that week, there would have to be a lot of scrambling around by us both.

This seemed like it would be doubly distressing because she really didn’t know me at all, having been around for only a few days.  I’m not sure how long she was in the city’s system, and what it was like for her before that, but it couldn’t have been all that much fun for her.

She’s not all puffball, though – she has some spirit! 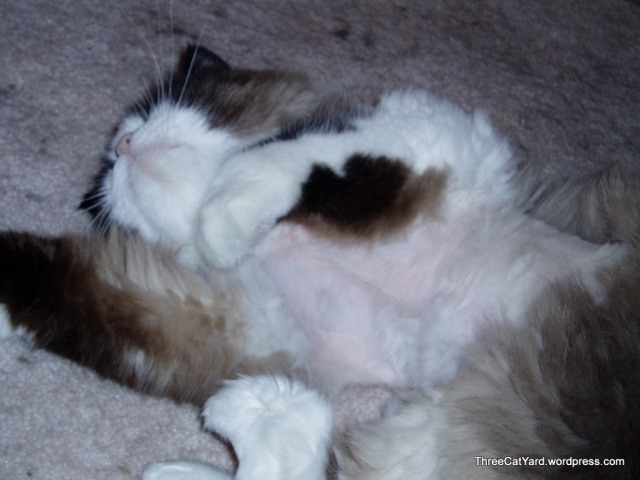 I had a morning appointment at the groomers.  This wasn’t the one I use now, she stopped doing cats sometime after this.  I had a early morning appointment, but she was late and I was early.  Waiting in the car, I let Calla out of the carrier.  At one point I let her jump down off the seats and she went straight under the car seat.

I managed to extract her from that soon enough, but it was nerve-wracking doing so without possibly letting her out into the parking lot.  Finally, the grooming started.  One nice thing about this groomer, is that I got to help hold Calla, which I think helped a little when the groomer was doing the difficult, painful cuts down to the skin.  My plan was to try to save as much fur as possible, while getting the mats.  It was not very warm at this time of year.

This ended up not saving a whole lot – outside of the already cut belly strip, almost all the fur up the sides to maybe a few inches down the back had to go,  leaving a fat strip like a mohawk.  Combing that down each side did a decent job of looking like she had hair.

She needed a flea shampoo too, during which she did give me a nip on the hand.  All this took quite a lot of time, and cutting out mats hurts.  She did really well, considering everything.

So then it was rush back home, back into her room, and off to work. 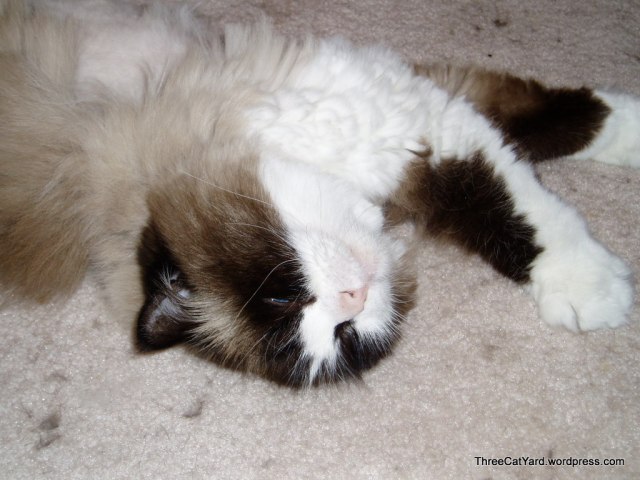 The next morning was off to the vets.  More driving, which she dislikes, and a new strange place and people.  She was pretty good there, tucking herself up to me on the table.  Then home for her and work for me again.  The weighed her at 7 and a half pounds.  The city had weighed her at 8 and a half on the previous Saturday, so she lost about a pound of hair.

She spent a lot of her time up on those shelves – she could look out the window down on the street for entertainment, and she liked being up high.  I don’t recall her spending a lot of time in the closet after the first day, which I liked.

What I liked the best is how after the cut she would roll like this when I was in there with her.  She really appreciated being able to move like a cat should,  even in the confines of the small room.

During that week there was a funny moment when I heard a noise outside the closed door.  I opened it a crack and in popped a two-headed monster – Gus’ head on the bottom and Julie’s above it, like a short totem pole.  Calla popped around the sofa and saw them, and all three stared at each other.  Gus then hissed, and Calla hissed back and took a step forward.  Gus then ran, carrying Julius off with him.

Not the best start, but not the worst either.

Engineer with Cats
View all posts by Oldcat →
This entry was posted in Calpurnia, Cats and tagged Cats, Photos. Bookmark the permalink.

6 Responses to A Hectic First Week