Julius has a problem with toys.  No, he really has two problems. One is the irritating tendency to totally ignore a toy as beneath notice.  The other is an opposite tendency to go too far if he does like the toy.  I think I have mentioned this a few times before.

A prime example of the latter was a wicker toy that my mother sent a few years ago when I adopted Calpurnia.  There was a round ‘body’ made of light wicker and a feather or two attached.  I gave it to Julius to play with and he bit it into fragments in about five seconds.

So today I was trying to get him to play with a feather wand teaser toy.  Until today he has ignored the toy, but today he was interested.  He followed it with his eyes, then swiped at it and finally grabbed at bit it.

Then he started to look a bit worried and gagged a bit.  It was as if the feather teaser was stuck in his mouth and he was choking on it.  It only took about 10 seconds for him to break away, and then he left that part of the room and was done playing.

I looked at the toy, and sure enough he had bitten the toy so hard that his fang and punctured the entire rubberized plastic collar that holds the feathers in a bunch and gives them some weight and got stuck.  This would not happen if he didn’t bite with the fury of a tiger when playing.  And of course he blames the toy and wouldn’t even look in its direction after that. 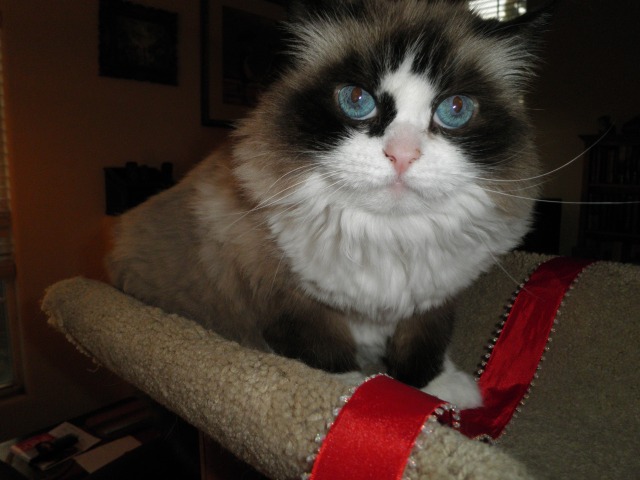 Calla is better at playing without taking it all the way to 11.  Here she is with a piece of Christmas ribbon that  I had stashed and came upon today.  She sure looks like she has no idea of what to make of it.

…also I wasn’t sure if I would get these pictures online because my camera import software choked today and corrupted itself.  The last time this happened it forgot all the pictures and imported them again, giving me multiple copies of everything.  And nowadays I have a couple thousand pictures in the camera. Ok, 1982 pictures.

I usually do the offloading of pictures on my portable instead of the faster desktop. With a big wait ahead, I did the reverse to get the pictures.  I also synced the pictures that were loaded from the portable to the desktop, and luckily all todays pictures were imported before the program wiped its memory of the pictures.  But I’m sure the next time I plug in the camera down there it will redownload all the pictures, assuming they will fit on the disk.  That will take a good long time….

When I moved the ribbon, then she knew what to do with it and gave it the what-for.

…I just noticed something about WordPress that has changed at least in my template.  At some point the first page changed from having a bottom to ‘scrolling’ when you page down when you are at the bottom.  It is the same effect that the pages on the WordPress site do when you Read Blogs.

What this does do, though, is make any widgets on the bottom regions of the front page invisible.  They show up on inside pages, like when you click on a post and read comments, but not the front page.  I think I will have to move at least one widget I have down there to a side column widget area so people can actually find it.

12 Responses to Julie vs Toys