It has been a while since I’ve featured Julie – on these nice days he goes out and then wanders so unless I go right out after him he’s likely not there when it is time to post.  Today was a bit of an exception so I feature him here.

I don’t think this has come up before but Julie has a little habit.  Whenever I have a blanket making a tent like this and I am on it or under it, it won’t be long before he hides under it.  I never feel him get in there, just at some point one side is made heavy by his body pulling it down on that side.

The other two don’t seem to care about this kind of thing themselves. 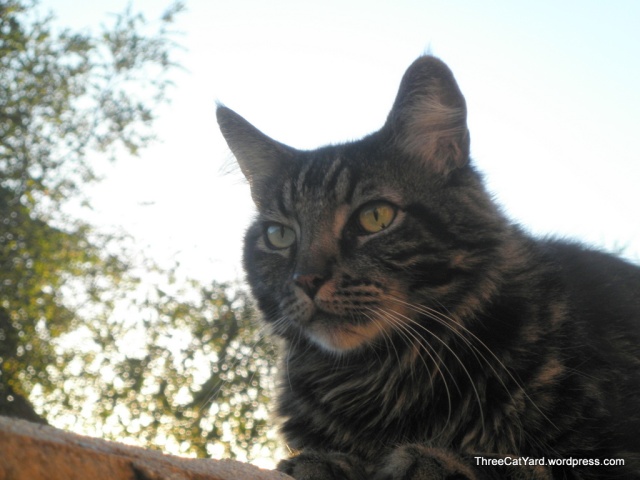 Later I saw him out in the back yard – not on the wall like this – but since it was hot out lying on the brick border under the overhang of a bush.

Wall walking is more of a morning or evening thing since it is cooler.

Gus is getting a bit scraggly in front, although he is doing a good job keeping himself groomed in back.  I haven’t cut his hair in a while so it is getting reasonably long, but there still aren’t many tangles back there.

I am planning to get Calla groomed this summer too, but have not had the time to get it set up.

Engineer with Cats
View all posts by Oldcat →
This entry was posted in Cats, Gustavus Adolphus, Julius Caesar and tagged Cats, Photos. Bookmark the permalink.