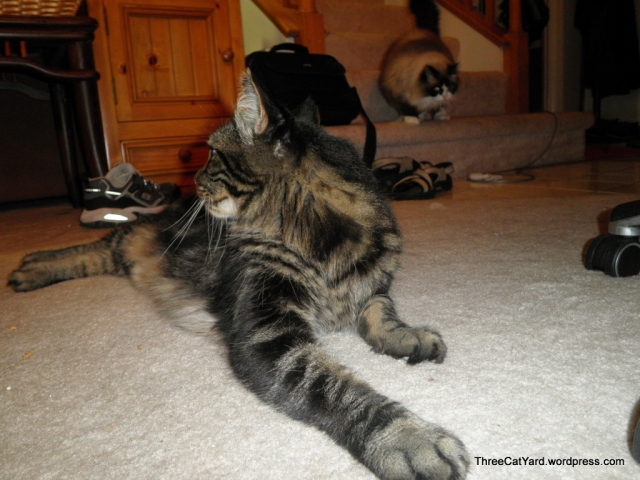 I was on the carpet with the kitties for an ulterior motive when Julie came in and flopped right in front.  I was about to get a good picture when SOMETHING HAPPENED TO RUIN IT. Julie then took off for parts unknown and I had to crawl away to a different part of the room to get some pictures…

So I was off trying to work with Calpurnia in her main kitty fort and was lining up a good shot when SOMETHING HAPPENED TO RUIN IT too! It’s hard to get stuff done when everyone is trying to one-up each other.

So what was the ulterior motive?  Well, I was trying to get some pictures with the Winnie’s Wish toys from Andrea’s fundraiser at Celestial Kitties.  You get a set of five for donating $15 or more.  They are very well put together and look good lying about.

Now, I’ve read reports of cats going freaky over the catnip toys she has sent out, but all three of my cats seem to react the same way to these.  They seem to mellow them out, which is by no means a bad thing given the usual frictions we can have.  So not a lot of photogenic crazy cats, but more hanging around nearby each other.

Instead of licking on them or biting, they seem to lie down near where they are, accidentally of course.  I’ve seen Gus using the pink one as a pillow a time or two.

The other three are more active toys – feathers and a string cord.  Julie has bitten hard on the string in his way – putting a big tooth right through it with an audible scrunching sound. Since he’s usually been just in from his outside jaunts, he hasn’t been up to a lot of craziness.

9 Responses to Tit for Tat