Remember the story about Gus and Calla getting pretty close in the morning on the bed?  Well there was a round two this morning.  Gus had just climbed up and was sitting by my shoulder when she came up behind, and again moved up onto my stomach.

This time Gus was watching.  She moved close to sniff at him which made him flinch a little,  but that’s all.  She moved a little bit away to the other side of the bed and poked around there.  No fireworks at all. 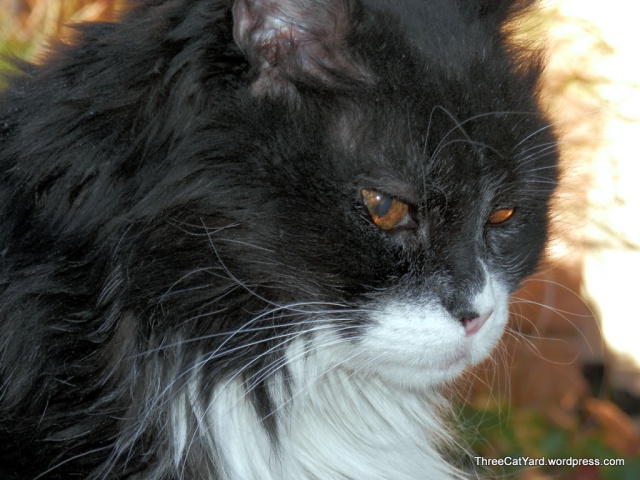 Yesterday I did a bit more trimming of Gus’ hair to remove mats.  He was pretty good about it despite him getting pretty thin in spots.   I think I will keep trying to get the mats out no matter how patchy it makes him look.   I’ll probably skip a few days to give him time  to get over a session.

Calla was sitting on the towel I used to catch the cat hair this morning.  I know she likes towels, but I don’t know if the Gus hair is an attraction or if it was one of the herb mixtures that is sitting nearby.

Aside from the crazy catnip herb mixture, the effects of the herbs are a subtle.  However, it seems pretty clear that the cats have a tendency to be hanging out near one of them at any given time.  That spot of pink is one of them in the picture above.

Today I was messing with Calla and she jumped down from the chair right over the pink bag and felt the need to tug on the carpeting right around it. 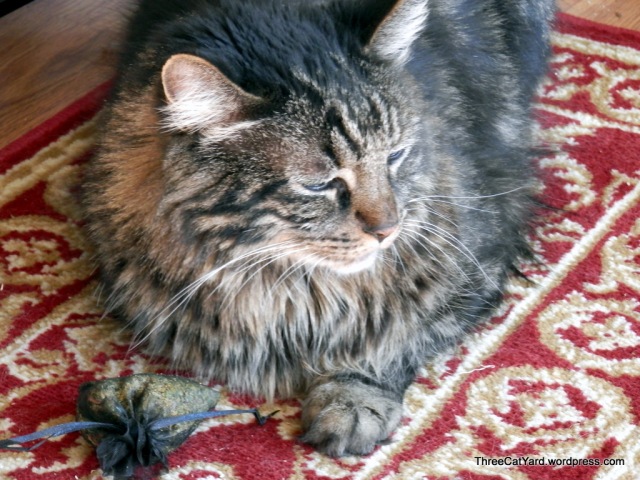 Julie, too, seems to often be hanging out near a bag.  Even if it doesn’t make them wild, it has its attractions.

4 Responses to All the Trimmings