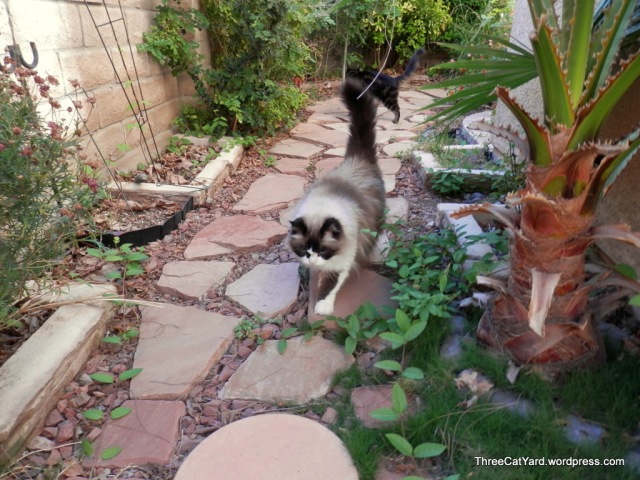 Calla coming back in from her constitutional out back.  She strolls out to the brick border on the right around the corner and sits out there a while then comes back in.

I took my own walk again – this time I drove out to the trailhead at Wildwood Park just to the west a few miles.  I didn’t think I would do anything too tough, but I ended up doing 5 miles.  Much of it was more or less flat.

The park was where a lot of westerns were filmed in the 50s – Gunsmoke, for one.  The butte – like hills to the north sure do look familiar.  This whole area is a large plateau near the sea – you can really tell this when you drive west and the highway drops nearly a thousand feet to sea level in a couple of miles.  At the edge of this park is a gorge that the paths skirt that is very deep with vertical sides emptying out north through a split in the hills into the Santa Rosa valley.  Great views, although at times you really notice that the dirt trail is at the very edge of a huge drop.  There was one place where there was a split in the ground making a fissure showing you that the whole trail was on an overhang. 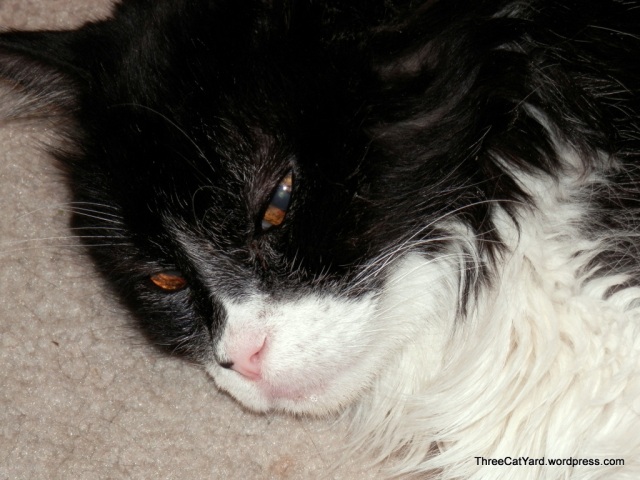 So this part was all pretty much flat but I wanted to get to this waterfall called Paradise Falls.  I know what they mean – a stream with actual water in it is so alien to this part of the country in the summer.  It is in another gorge that a path circles around and heads down into.  It is fairly steep, and the last part had to be hacked out of rock on one side of the stream.

There were a lot more people on the trails than the ones I have been frequenting.  Sometimes that’s nice.  There was a horse and rider coming back as I was going out, which was cool.

I got home early enough that everyone got to go outside in back.

Some just liked having the door open for the breezes.

Engineer with Cats
View all posts by Oldcat →
This entry was posted in Uncategorized. Bookmark the permalink.