It was cool today, and breezy so that the afternoon was very comfortable yet when the sun started going down it was decidedly cool.  I don’t know if this is the reason Calla avoided her usual spot.

She spent most of the day snoozing in the box.  Oddly, she was sitting crossways in it, so that she was squished into one end only.

When she went out, she settled here across the rocks from her usual spot.  One odd thing was a frond that I was using to tease her a few days ago was moved from her old spot to the new side, right next to where she is sitting in the picture.  Did Calla move it, or was it the wind?  Hard to think the wind would blow it that direction….

It was too cool or windy for Gus to come out.  This is a picture from yesterday. 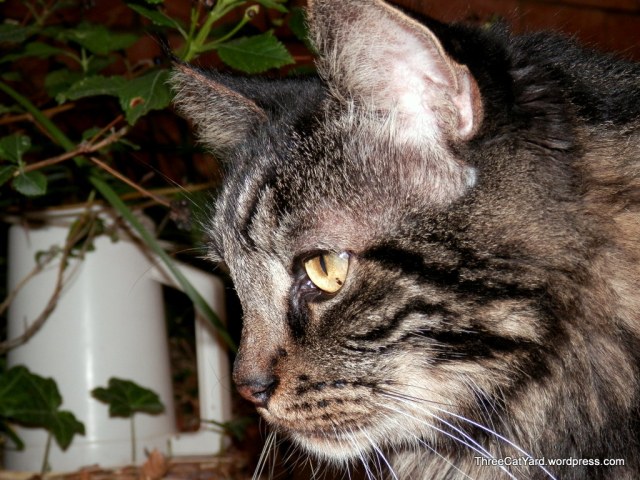 Julie did come out, but I finally dragged both of them back inside to avoid having to keep a door open for them.  They were pretty pissy about it for a while.  A few treats helped them to take a philosophical view of the matter.  Gus got his share too.