The cats are all tired out tonight.  It has been a strange day all around.

It started out with a bang since I decided to take the kittens to the vet on the spur of the moment last night.  Rhea has needed some booster shots for a while and Davout has had a nagging problem with very soft poop bothering him for a while and it wasn’t going away on its own.

Taking them both together in the carrier actually made them calmer than each alone.

Whatever is bothering Davout hasn’t seemed to affect his temper.  There are a few theories floating about that are being checked on.  In case it is a diet thing I got some different cat food and there is a bit of medicine that might help firm things up.

Rhea also got a bonus foot bath by the vet techs since apparently she had gotten some on her in the recent past.

Then when I got home from work the back doors were wide open and had been so for some time.  There was some gusty winds this afternoon and it popped open the double doors that weren’t too securely fastened.

I don’t know if the cats used the chance to go out back during the day while the door was open.   Julie has on other times, but he was inside with the rest.  They may well have been spooked by it banging open on its own. 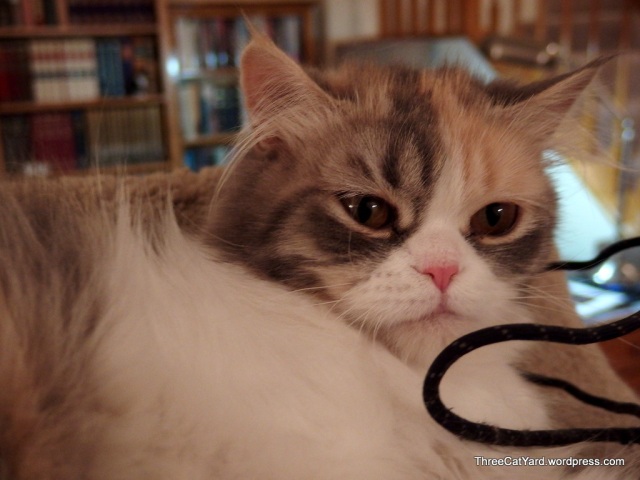 In either event, the combination of scary door or outside adventure seems to have tired out the entire gang of cats and they have been very quiet.  Davout took his medicine like a champ.  We shall see what if anything the tests show.

I did mention the wonky tooth on Rhea to the vet and she took a look at it.  She didn’t have a lot to say right now.