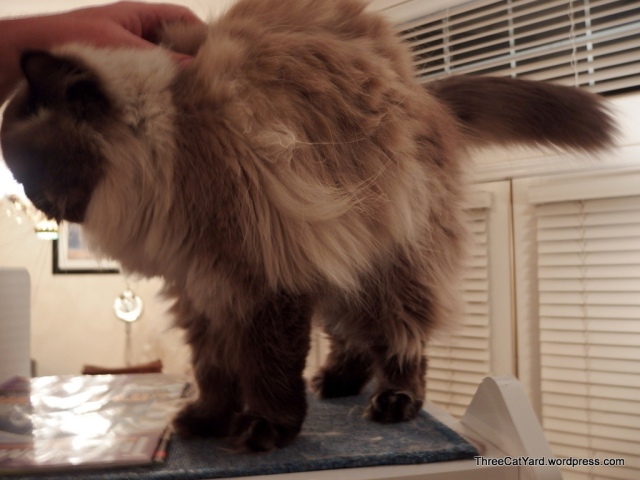 Davout likes to be scratched on his back when he’s on the cat tree…he goes straight up.  If he’s on the floor, he skitters away as if I am radioactive.  Well, that’s one reason I got this tree to give more platforms that make shy cats braver.

There aren’t many pictures today and none of Anna.  No huge reason – I went out on another hike because the weather was perfect for it.  I went out much earlier than usual – like an idiot I usually get started in the hottest part of the day – but then ‘enlarged’ the hike bit by bit until I still was tottering out the last half mile as the sun hid behind the ridges I was hiking along and the temperature got cool very quickly.

I have a smartphone app that tracks stats but the phone got too hot and ran low on batteries so I had to shut it down halfway through.  It probably was a somewhat over 10 miles with above 2000 feet of up and down.  I reached the “top of Albertson’s” which is over 2100 feet, then backtrack some over to the final 600 feet to the top of Simi Peak which is 2400 feet high.  The other side is basically vertical, so you are perched up there like the Grinch looking down on Whoville, but instead it is some of the nicer neighborhoods of Thousand Oaks down there.  Looking the other way the roads you have come from are spread out in all directions, nicely if not so dizzyingly as the view to the South.

I had thought yesterday to try some face to face time around Anna’s door, but when I visited her around dinner time Rhea was right outside the door when I opened it up to leave.  Anna  was about 2-3 feet away and there was some hissing and then growling from her. Rhea didn’t react herself, but I put mixing aside for the moment.

There was a little personal progress with Anna after the meal.  She did more rolling around, and even exposed some belly.  She is getting accustomed to being touched in this…but the time limit is still only about 10 seconds or so before she gets riles.  Interestingly, she doesn’t seem to mind where you pat her – back or belly, ether is fine as long as you quit on time.

After real dinner was a special Thanksgiving snack for Anna, and then one for the kittens. 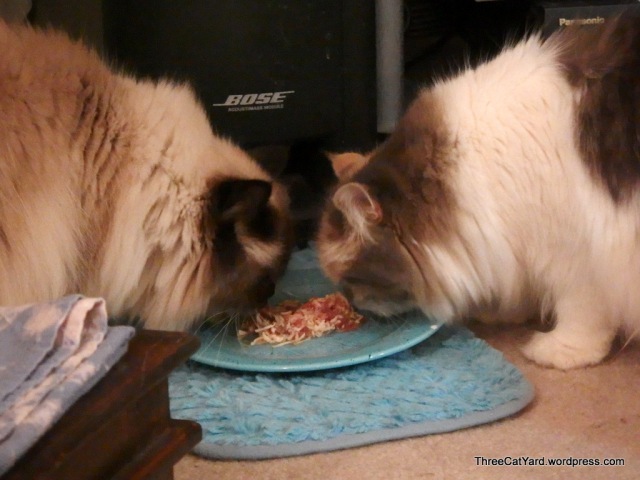 The kittens are very good about sharing wet food.  However, this mode of sharing by location on the plate did not work out for long.

Instead they went to a time-sharing method where each would take a few bites, then back up and let the other try. 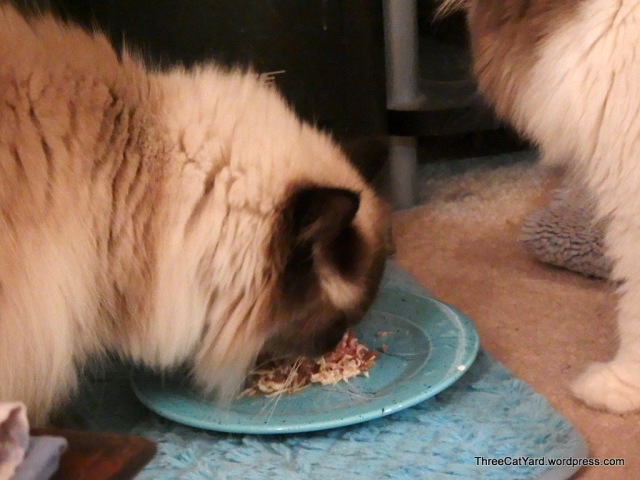 They each got their share of the special food, alternating like good kitties until it was all done.