Well yesterday’s post really brought out the comments!  Who knew this was a good subject to generate web posts?

I did attempt to give a sanitary trim to Rhea this morning.  It went fairly well – she kept trying to pull away but she’s long enough to tuck under an arm and then I can bend the tail out of the way.  I don’t know if I got enough but there were a lot of tufts about the room when I gave up.  It looked a lot like a feather pillow burst open, as the fir there is mostly white.

Again, Davout was a bit worried, but since Rhea did less shouting under the trim he didn’t seem as upset about it.  I noticed also that his front whiskers are getting circular and heading for the opposite eye.  I might have to trim them. 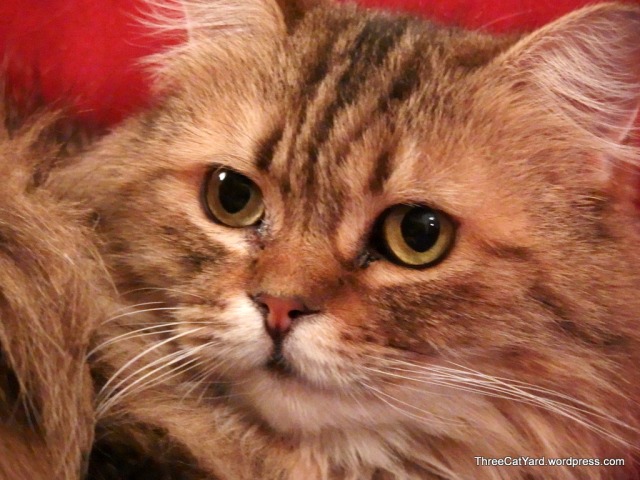 The only grooming with Anna is her grooming me.  She did a long session of licking the back of my hand today. 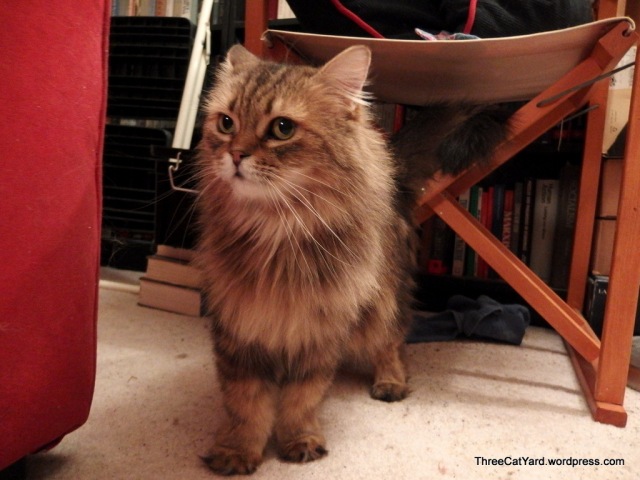 For whatever reason the kittens were hanging out downstairs more today rather than right outside Anna’s room.  Part of that might be that I did more downstairs stuff rather than stuff in the bedroom.

Anna was getting really crazy when playing.  She would plant her front feet on the string or a toy, hop her back feet in a circle, then jump up on the back of the sofa and pounce down and bite at it again.  A few of these wore her out for sure.

Looking at this picture, his eyebrow whiskers look to be heading for his eyes too!