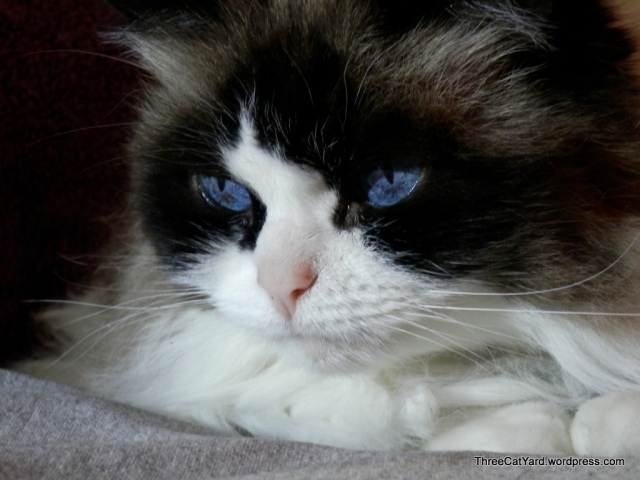 This weekend marks the fifth year since I adopted Calpurnia – on February 20, 2010.  This picture is from her last gotcha day before she died about 6 months later in November 2013.  She and Gus had a very hard time integrating after a promising start that year which ended up taking to the end of the year to resolve.  So that might be a lesson for Anna and Rhea’s situation.

I had only had two cats for the previous 25 years or more, most of that with cats that lived 20, 12, and 17 years and 13 years.  I had moved to reading more cat sources on the internet in recent years as an antidote for increasingly fractious talk elsewhere and the recession had put more cats in the pounds to boot.  So I decided to get a third cat.

There were annoyingly many false starts in what is supposed to be an easy process and eventually I used Petfinder to locate a couple candidates in a shelter about 25 miles off in the San Fernando valley.  Nobody there seemed to know about the second candidate but I found Calpurnia and adopted her.

She had been somewhat neglected since she had absurd matting by all four legs to the point where she couldn’t freely sit down – her front and back legs were manacled to each other by mats.  Even though she could hardly move freely she could vault herself up to the topmost shelf in the room, as I found out when I visited her a bit later after she had time to adjust.  The ceiling is about a foot above her head there.

On her last day, just before I took her to be euthanized she shook off her illness for a moment and did that same leap to the top shelf one last time.

As soon as I could I got her a horrible haircut to remove the mats.  She had to be shaved aside from a two or three inch wide swath on the top – back which hung down like a combover for months until it grew out.   She spent a long time rolling over and stretching for me when we got back home – she loved being able to move like a cat again.

I wanted to take more pictures, and even got a new camera.  With the other issues I found the pictures were slacking off.  I decided to make a blog like those I had been reading as an impetus to keep me taking pictures.  I guess it worked since I have been posting daily and taking pictures almost daily since I started in April 2011. 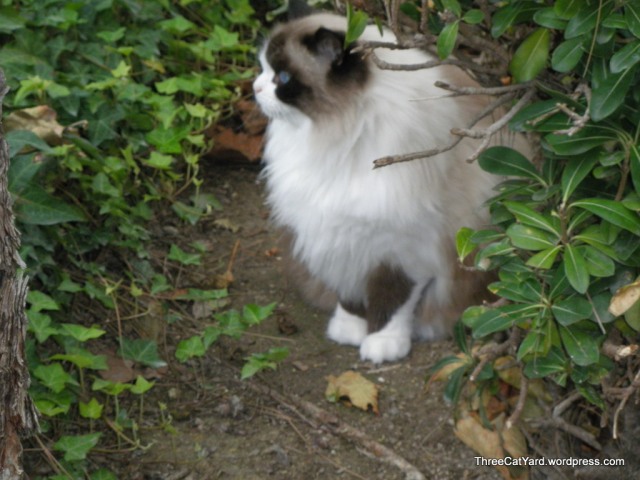 Calla always liked going outside for a short prowl, but she wasn’t the wanderer that Julie always was.  She did have a habit of going to visit the neighbor’s front porch or the pool area.

And she had the most absurdly shocking yawn of any cat I’ve known…like the top of her head was falling off.

She was the best of cats.

Engineer with Cats
View all posts by Oldcat →
This entry was posted in Calpurnia, Cats and tagged Cat, Cat Behavior, Pets, Photos. Bookmark the permalink.

8 Responses to Five Years On