Rhea was looking fairly bored when photo time was nearing…

Harrison had followed me about as I made dinner.  A few times I heard him knocking about a cat toy on the floor, all on his own.  The kittens are cautious of him, and curious.  They watch him closely, which he ignores entirely.  Rhea sometimes comes close and snifs at him, which he also ignores.

Harrison did make some very spry moves on the toy, which the camera missed.  When it came close to his front, he almost always hooked the thread with a paw.

I did catch the end of this half turn and lunge.

He seems a bit awkward, but this probably is from the loss muscle mass on the body.  He seems to arch his spine more that most cats, which might be from that too.  This might get better.

Davout had done his fur up into a very thick, full fluff today.  With Rhea and Harrison constraining him, he was interested but reluctant to make major moves.

Rhea is pushy as usual and went directly to the front of the line.  I dangled it over the top of the large post and she would stare it down and climb the post after it. 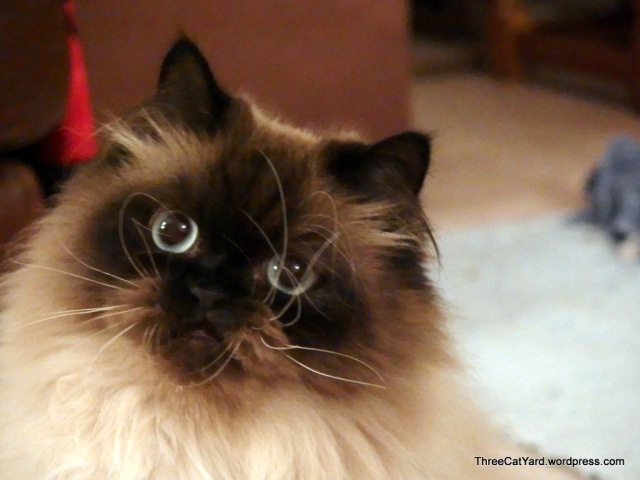 Here’s a better view of Davout in his best fur coat.

Engineer with Cats
View all posts by Oldcat →
This entry was posted in Cats, Marshal Davout, Rhea Silvia. Bookmark the permalink.