Anna at the Vets 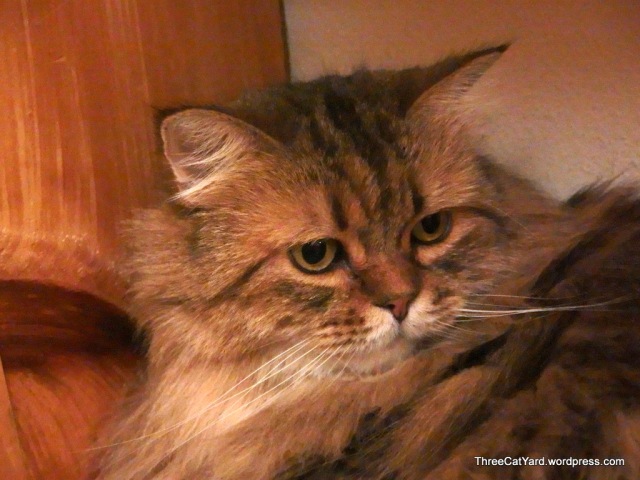 Anna had a checkup this morning, which she didn’t like one bit.  She resisted getting into the carrier pretty well, and cried the whole way there.  She was only normally twitchy and grumpy when the exams were going on, which is a little better than other visits.

The vet has some new thing to try before full on medication for Anna or Rhea or both to stop the tussles.  It is some other thing like the Calm food.

But Anna’s weigh in shows that Anna has gained considerable weight since her last visit, which I suspected, and she needs to have her diet changed to mostly wet food.  Since I just got a big bag of the Calm food last week, this was kind of annoying.  Also, Anna was very picky about the wet food in the months where I was giving her both wet and dry.

The vet had some other ideas that seem doomed to failure given the current situation, like getting Anna out of the room by having the food outside.  The problem I see there is that if the door is open for Anna to go out, even if she would, Rhea will go in first and a confrontation will result.  This house is not large enough to avoid a face off, as the whole upstairs is connected by narrow stairs and halls.

Now, I might be able to drag Anna out regularly and let her nibble from a bowl outside as a treat and incentive, but I know that I will have to do the dragging.  Before I resorted to the pet gate, I left the door open more.  Even before Rhea started going into her room after her, Anna had decided to stop leaving her room of her own will.  And since Anna has hissed out the door at imaginary kittens, even putting the others away probably will not help. 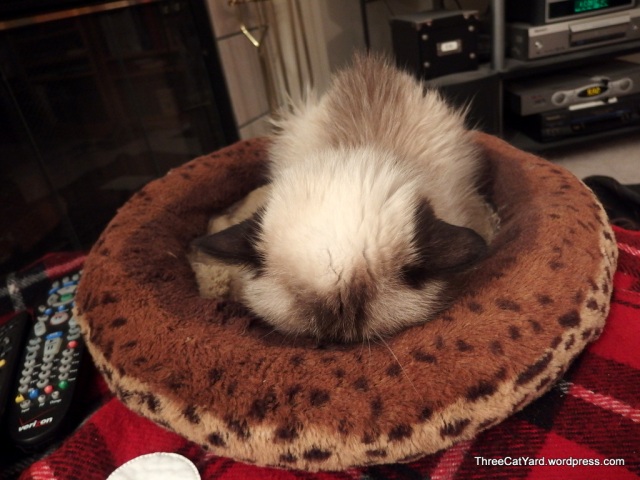 Harrison had another uneventful visit with Anna after she got home, although he did get spat at once.  Anna also spat at a cat at the vet’s office from her carrier when being carried out to leave.

She also got a little bottom trim, although not as severe as Davout’s was.

Rhea has continued her assaults on the cardboard cover of the gate.  She’s found a cunning foe in the duct tape I used to secure the cardboard.  Yesterday I found a piece stuck on her paw.  Today she was scratching while I was in there and suddenly stopped.  I’m not sure why I looked but she had gotten a claw caught in some tape and could not pull away.  She was brave enough to wait calmly for me to get her free.

There has been another interesting development.  Several times while she is peering in or clawing at the gate Davout has come up and bit Rhea on the butt and gotten into a play tussle with her in the hall.  This doesn’t make Anna any happier, and so far hasn’t discouraged Rhea much.  It is pretty funny. 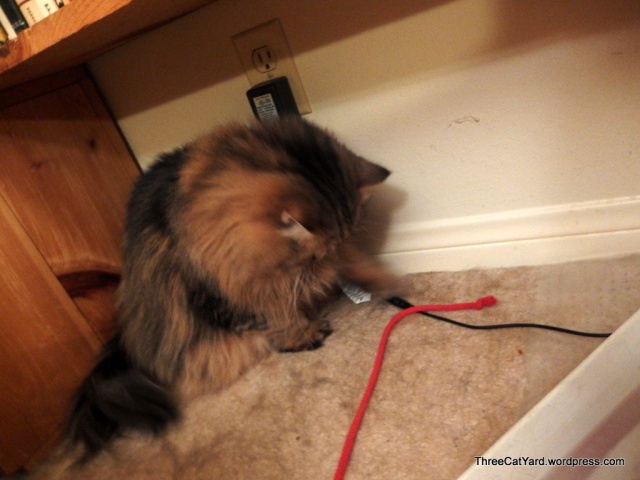 I did some playtime with Anna.  She’s probably going to need more toys for exercise.  I need to come up with an even more permanent solution to Rhea getting through the gate.

It is pretty funny that it would be fairly simple for Rhea to just jump over it.  This has not occurred to her yet.

1 Response to Anna at the Vets