I don’t recall if I mentioned over the weekend that I ordered a scale for the cats over the weekend.  With Harrison and Anna having weight issues – Anna needs to lose some, Harrison is losing what he doesn’t have – I figured I needed to keep more touch with actual weights.

It came in today and after a little playing around it seems to work well. I managed to get all four cats weighed.  It has the ability to zero out the base weight of a box or towel, but the cats seemed not to mind standing or sitting on the platform itself.  Even Anna, who I dragged out of her room past the other cats stood long enough for a weighing.

Anna weighed 11.36 pounds.  I had had a feeling she was eating less overall, and more of the wet food.  Her last weighing in November was 12.94 pounds, so that’s a good drop.  I was hoping that better food and more activity and less anxiety might help out there.

Davout weighed 8.22 pounds.  His last weighing was 8.38 pounds.  This might just be a random fluctuation, or that I have been leaving less dry food out.  He shares wet food with Rhea but supplements it with the dry food out.

Rhea was 7.88 pounds.  I don’t have her last weight in front of me, but it was in that range before.

Harrison was 4.94 pounds.  That sounds bad, and it isn’t great, but he was down to around 4.5 pounds last week.   He’s still scheduled for an ultrasound on Friday, but I’m happy he’s recovering some weight already.

What should he weigh?  Probably about what Rhea does, or a little less.  She does have a longer and more robust body than he does, but not a lot bigger. 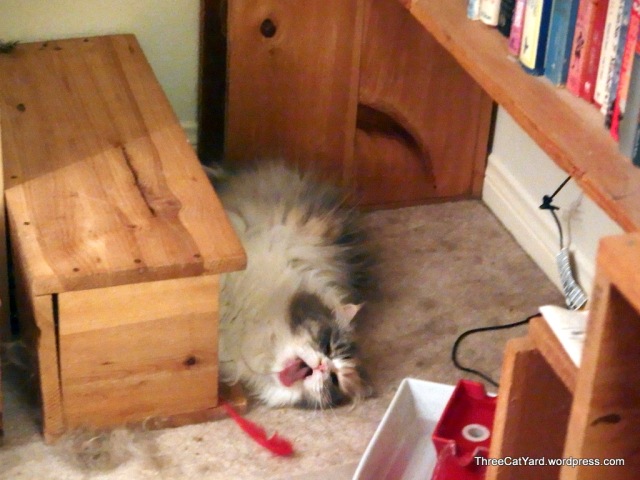 I had Davout and Harrison in with Anna.  Rhea wasn’t too interested for a while, but when I came down to start this post, I checked the upstairs and found she had broken into Anna’s room and was rolling around in one of Anna’s spots with a catnip banana. Anna was just above this on the shelves.

I hadn’t heard noise before this, but after I left again there was a tussle where presumably Rhea jumped or reached up to have a slap fight with Anna.