Rhea continues to be amazingly friendly with repairmen in the house that she’s never met. I’ve seen her sit in the hall watching the furnace men, even peeking in the toolbags when he’s off somewhere, but this is a new level.

She sat like this for a while until he got up a time or so, and only moved to the living room when the loud power tools were on.  She was so brave even Davout came down and watched from halfway up the first stair rather than hide under the bed. 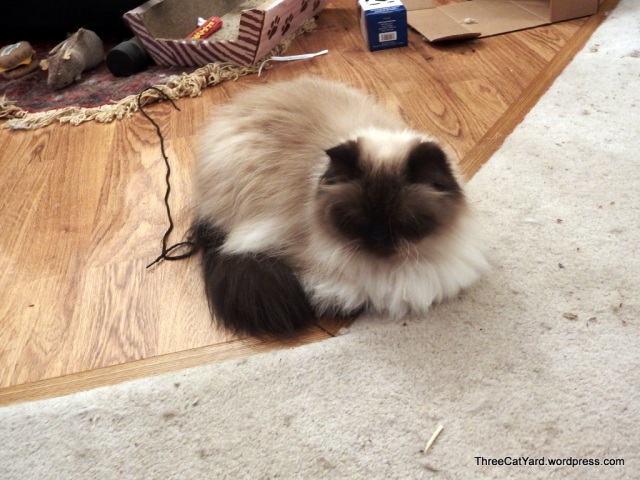 I’ve started to see Davout hanging out at the point on the flooring.  You might remember that this was a favorite spot for the old guard cats – Julie, Gus and even Calla could be found on this point all the time, sometimes more than one at a time. 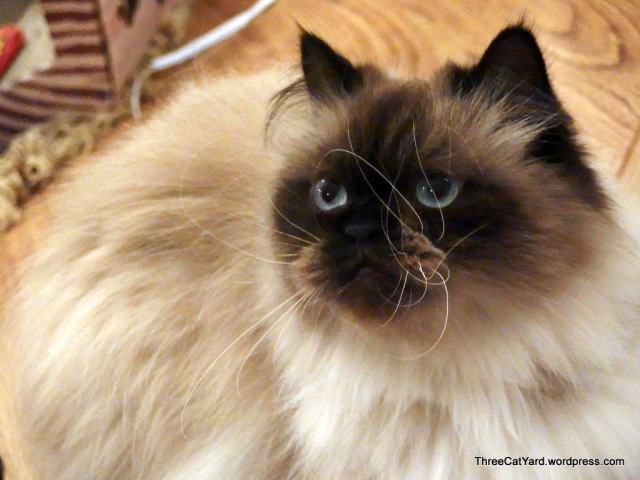 It is pretty safe to say that Davout is back to normal.  It is often hard to see if he’s eating since he waits for Rhea to start, and tends to eat more dry than wet.  There was some evidence he’d been eating some dry, and he ate a good portion of another treat-soup packet in the morning.

This evening he was hungry enough to share the dinner plate with Rhea and eat the wet food in alternate bites.  He hasn’t been sick since the first night, and his activity is normal.

Thanks all for the good wishes and prayers for him, it seems to have been a minor trouble.

We did a little playing, and right now he’s resting by the television.