In the last few days I noticed the battery backup on the internet-TV-telephone system I have was running low so I got a new battery and installed it…and the internet didn’t work.

So with only my cell phone working I got on a service chat with the provider…after 40 minutes of waiting.

On the more pleasant side, I managed to get a look at both Sherman and Davout pooing and both looked nice and solid.  Sherman’s ear looks better, although I did do a few more drops.

I’ve been limiting the meat in the wet cat food to turkey rather than chicken in the last several days which might also be helping.

Sherman has been especially perky today. 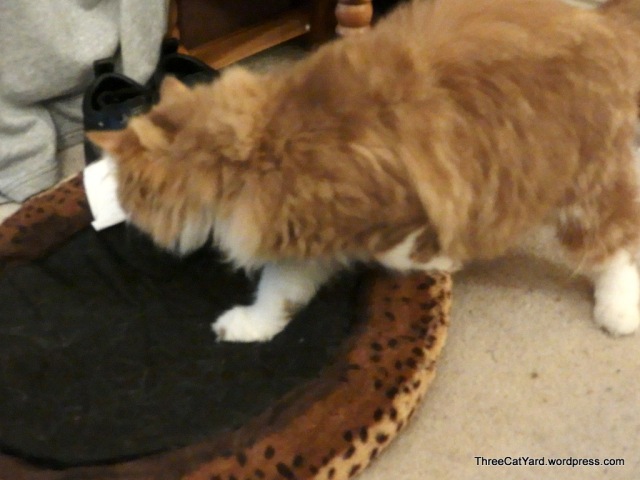 He knocked over Rhea’s bed while playing with the toys, turning  it upside down.

The dude on the cell phone chat first told me to unplug the battery, unplug the unit, then replug them both in to “reset” the system.  Now, my unit is in the garage and the plug is by the garage door opener on the ceiling.  Over the car.

I figured this was ninety percent chance bullshit, but I did go and do that while keeping the dude on the chat line.  Opening the garage door, pulling out the car, getting out the ladder, climbing up and down twice. Of course, it had absolutely no effect.

Rhea’s world is in ruins with her bed flipped over.

So his next idea is to “check if the outlet works”.  The outlet that was streaming internet while I was changing the battery.  The outlet whose other side runs the garage door opener I just used.

Screw that shit.  I’m not climbing that ladder a third time for no reason. 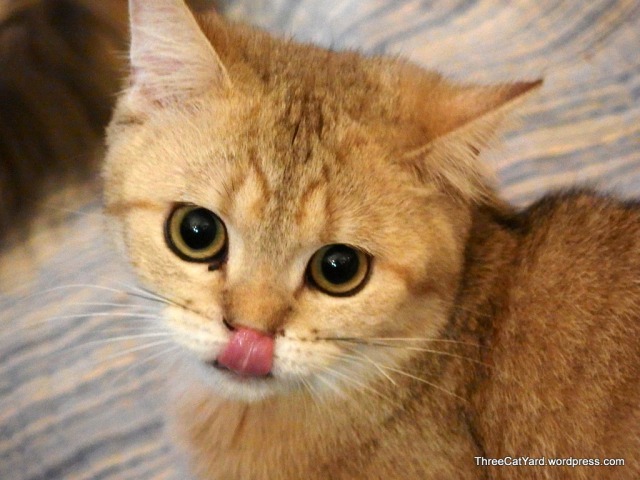 While I was typing that to the guy, Grant darted out into the garage and right outside into the night.  Wonderful. 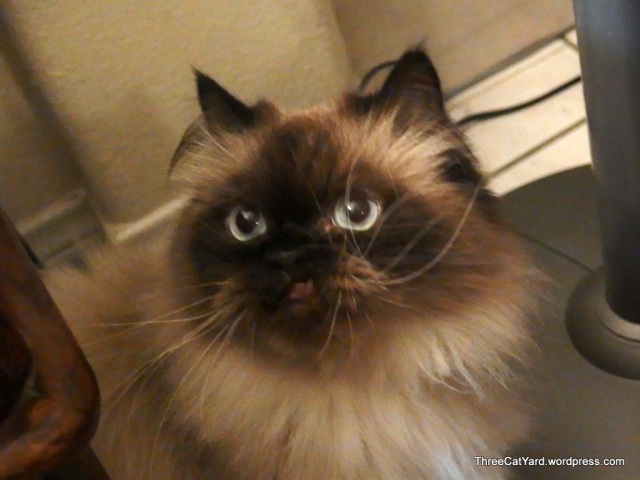 So while still on the phone chat with this idiot, I manage to herd Grant back from under my car in the driveway into the garage to hide, and close the door without scaring him right back out.

So now the dude gives up.  So far he has not done a single thing on his end to check anything about the connection, which this same provider under previous management did.  So he schedules a new call, which I at first thought was going to be another telephone call with somebody else but soon turned out to be a visit.  Six days in the future.

I note to him that six days from today is a Sunday.  I doubt they make calls on Sunday. I have no idea where he pulled that from – when I called him on it he claimed it would be the next day then.

So after letting this fool go, I went out into the garage and in literally thirty seconds, found a loose fitting that made everything work perfectly.  So then I had to call a different line to cancel the service call.  So for security reasons they claimed not to be able to do anything for me unless I had a PIN number, which I didn’t know.  But when I told them I just needed to cancel the service call added just minutes before, they did it anyway and then gave me my secret PIN number.

The batteries last about four years.