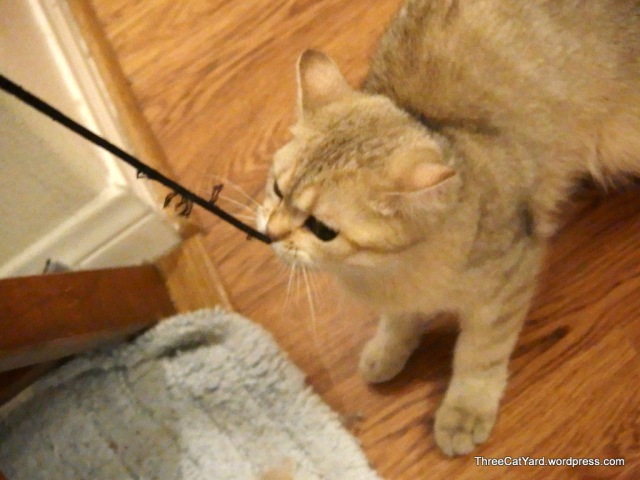 It’s been a couple days since Grant has been around for pictures.  He’s fine, just hanging out in a basket under a table when he’s tired out from messing around.

I’ve been keeping up with reducing his reaction to being held or pet, and I noticed that he seemed to be chilling out since his surgery.  I’m not sure why there would be such a physical link, perhaps he just is glad I came back for him.  He’s still twitchy, but not more than Davout.  When he is up on a high spot, he’s a lot more willing to be touched and only ducks away a little.  He’s still pretty averse to being held, but its not the wild struggling like before.  On the weekend I wondered if the painkillers were involved, but he’s still a lot better than before.

I don’t recall any other male cat having a large change in this way from neutering.

Anyhow, the garage was open and there was a huge crazy parade of cats rushing in and out past each other and taking turns being the crazy one.  Rhea climbed up to the top of her furniture pile and watched.

After grabbing the shoestring toy (with wand) he dragged it to here.  The box was also dragged from the door to the garage to this spot before the stove.  They all like this dense foam mat and use it as a scratching post.

The boys like to make a home base area and drag stuff to it – there’s one by the front door, one by the garage door, and now this one when the door to the garage is open.

Sherman is learning the ins and outs of crazy running.

2 Responses to Boys Being Boys