Changes for the Better

Grant keeps getting bolder near me daily – he will leap away from some moves but is almost entirely non-twitchy when touched at eye level and even can be picked up a little without panic.  When interested in what I am doing he will get very close, just inches away at times.

Another project is Anna, of course.  Recently he has tagged along on visits to Anna religiously and come into the room, at first through the gate, and now I let him in.  He loves the nest Anna has made on the back of the sofa, which I cover with a towel to catch some of her loose fur.

The first few times an advantage of this is that this was out of Anna’s sight while she stood on her shelf safe place, so she could get used to him.  The next few days I presented him to her on the way out and she did well by her lights.  She does seem to feel better if other cats are being held safe.

Now she doesn’t even mind him being there, despite the look.

So a few times now I have carried her down and put her near Sherman.  This time she did hiss once, but she didn’t lash her tail or growl.  Sherman has a calmness a lot like Harrison had, and he doesn’t get upset when she’s misbehaving.  Davout is nice as can be, but he gets upset himself when she hisses at him for too long and prefers not to irritate her.

A few scratches and Anna felt good enough to sit down and make non hostile sounds at him.  She even turned her back on him a time or so.   No tail lashing, either. 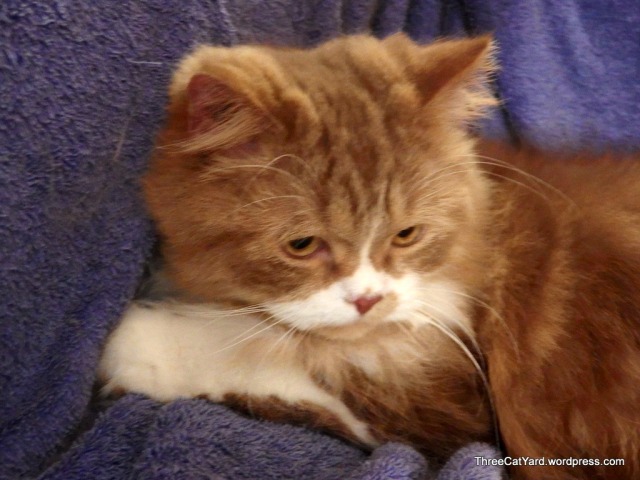 When the sounds at the door got too loud Anna went back to her high spot.  Sherman moved forward to where the deepest part of the crushed down pillow meets the back and side.

The others were outside the door, so I let them in.  Davout had to make sure things were all right.

Rhea, to her credit, was not insistent in getting in and bothering Anna, and was distracted enough at the Generals poking around to not creep up and peer at Anna for a long time. She was on the alert, possibly a little worried for the boys, peering around at sounds to see where she might be.

She was by no means as obsessed by getting to Anna as she was before the boys came.

Grant went into the closet and was interested in playing with the sheepskin carpet bit. Sherman had to see what he was up to. 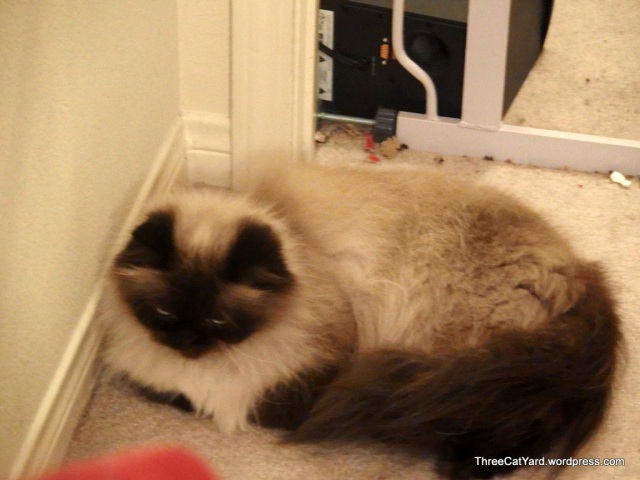 Once Davout saw nobody was in danger, he sat down by the door and watched and waited out of Anna’s sight.

While all this was going on Anna was calm on her safe shelf, only growling once at Rhea when she came in view and glared at her.

On the way downstairs I saw another fun thing.  Grant and Rhea were passing each other, and Rhea gave him a poke or two.  Instead of just taking it, he tried a gentle swipe of his own with the back of a paw.  This made her back off a bit, and later she did a pounce tackle on him.  Grant then gave her a less gentle normal poke of his own and she backed off again.

5 Responses to Changes for the Better