Ever since Anna decided to relax with the boys almost entirely, I’ve been pondering whether going to the next step is a good idea.

Anna is less and less worried about the boys, but she is less accepting of Rhea.  To her credit, Rhea hasn’t been pressing the issue herself, which is quite the change since the days when it was just her and Anna and Davout, who was too scared to do anything about an unstable, unreasonably behaving cat like Anna. 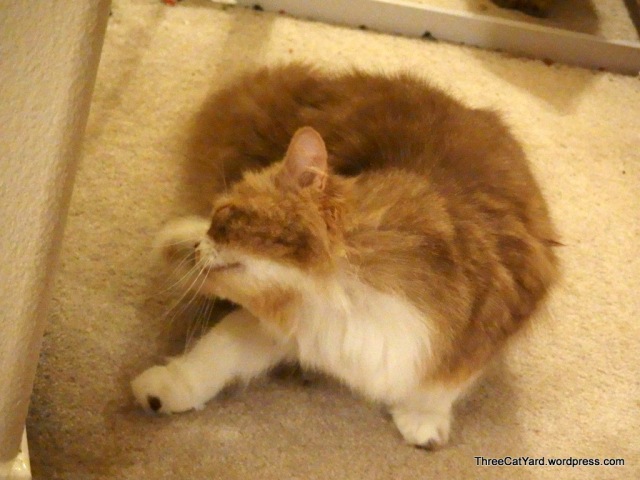 Anna watched the boys for a bit, and then got down…but not to run off, but instead…

She flopped down near the boys and lay down. 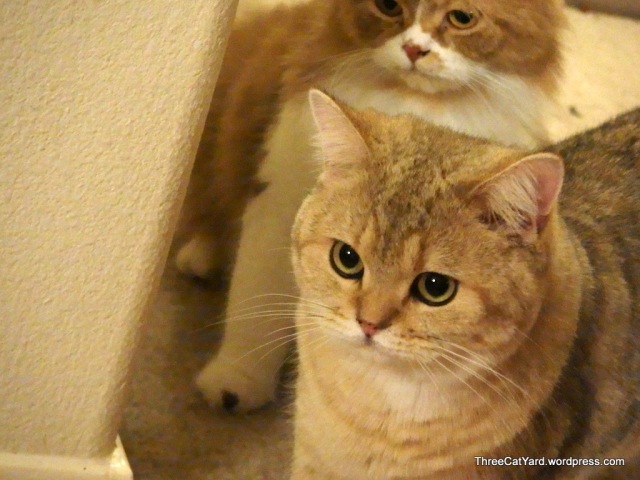 The boys were too cautious to move in more, and soon Anna retired to her safe shelf.  The boys went and explored the room and nibbled at her food. 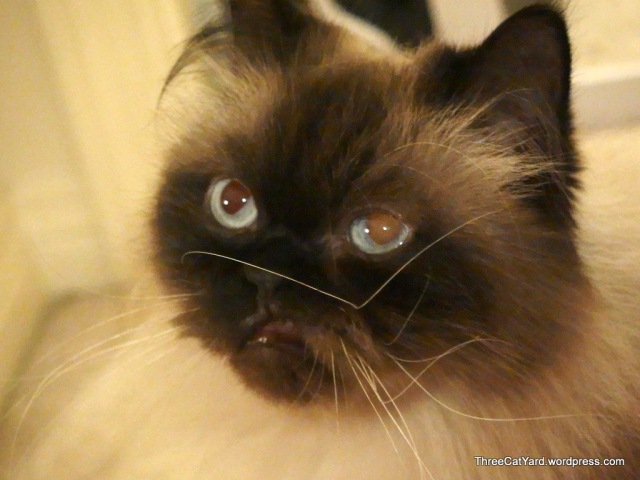 He still has the crazy whiskers.  Davout acted as the door guard.

Eventually Rhea came up and waited down the hall rather than came in on her own.  I decided to get some close observation of the two in sight of each other so I brought Rhea in to the back of the sofa.

Rhea looked around, then jumped sideways to this shelf top about 3.5 feet from Anna.  Rather than stare her down, she looked in a number of directions, including at the boys on the floor.

Anna was very good, not making any hostile sounds and some friendly sounds to the boys.  She did give a slow blink to Rhea.

Rhea turned down the tension level a notch by facing the other way.  She did turn and look at Anna, but not enough to be considered rude.  Mostly they both watched the boys.

Anna was very relaxed, possibly somewhat posturing.  However, her tail was still the whole time and not thumping.  Even if she was more stressed than she pretends, pretending is polite too.

Rhea’s body language was encouraging too.  Not quite friendly, but willing to give Anna a chance.

Rhea retired to one of Anna’s safe spots in the closet on a futon roll.  Sherman jumped up there to join her and after a bit she gave him a swat and made him jump down.  There she was out of Anna’s sight if not out of her thoughts.

All in all, it was very encouraging to see both the ladies willing to let bygones be bygones.  I don’t expect to see a cuddle fest any time soon, but this is very promising news.