The weather has warmed up at there’s been more outside time for the cats.  Rhea has been good and not jumped the wall.  She’s vanished a time or two but was hidden inside the yard each time.  It certainly will make Davout and Sherman happier if they get more outside time. 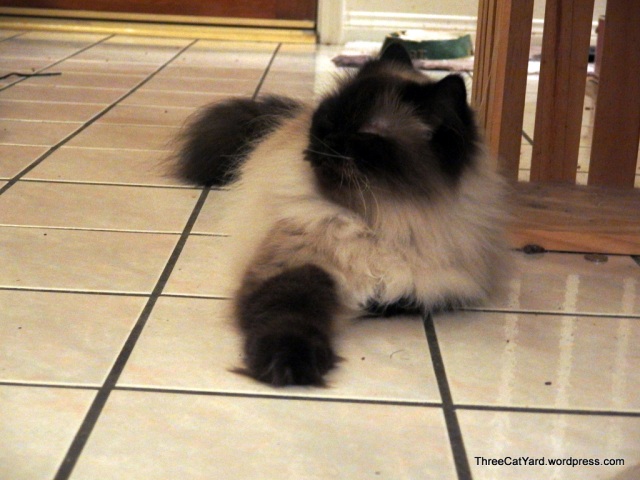 Poor Marshal D had a scary time the other day.  He ducked out into the garage when I was bringing stuff in when I hadn’t closed the garage door.  When I hit the control to close it, he got real scared and tried to go into the house through the cat door, which was blocked.

Poor guy kept ramming his head into the flap.  I could get him to calm down by holding him down, but when I tried to open the entire door he would get loose and bonk his head some more.

He calmed down once it was all finished, and is fine now.  It is just a reminder of how high strung he naturally is and what he puts aside to be the wise elder cat for the others. 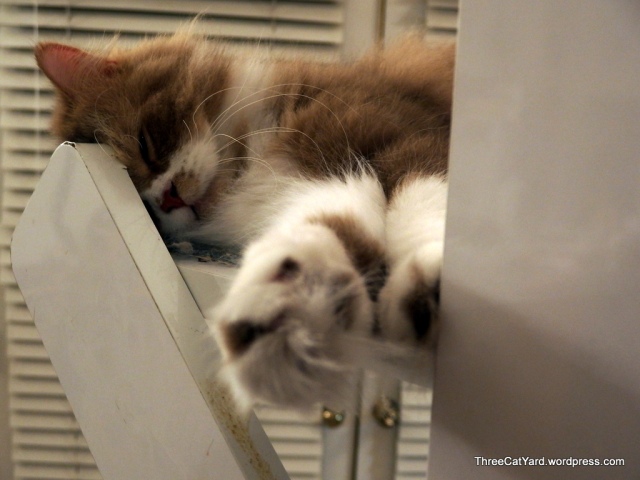 Sherman loves to jam his forehead into this support to nap up there.

The other day I got rid of the ill-fitting screen that Julie ripped a hole in a few weeks before he was killed and the other screen I had in front to block the hole.  Someday I need to have a general new set of screens, but the old stuff isn’t doing any good.  A few times I have just popped the window open to give the cats a head start jumping out before the door opens.  I think they’ve all used it at least once to go out…I think a couple have come in that way too.

Engineer with Cats
View all posts by Oldcat →
This entry was posted in General Sherman, Marshal Davout, Rhea Silvia. Bookmark the permalink.

4 Responses to Hands Out