I tried some experiments with the SZ camera today to see if I could do indoor photos better sans flash.  The first thing I tried was to adjust the ISO from whatever the camera’s brain decided to use.

What is ISO?  It is a measure of light sensitivity.  Low ISOs require more light to set them off than high ISOs.  So why not always use high ISOs?  Because there are tradeoffs.

When I got my first camera, it used film.  In those days, to make a film more light-sensitive the grains of light-sensitive chemical had to be physically larger.  Thus a more sensitive film was grainier than a less sensitive version.  Color film was worse than black and white, too.

With a digital camera, you have a similar effect.  When you boost the sensitivity, you magnify the normal noise in any electronics to be more apparent.  The ‘signal to noise’ ratio gets worse, adding some fuzz.

On the other hand, I managed to get a reasonable shot of Julie with his eyes open for a change.  I did have to boost the brightness overall in ‘post production’. 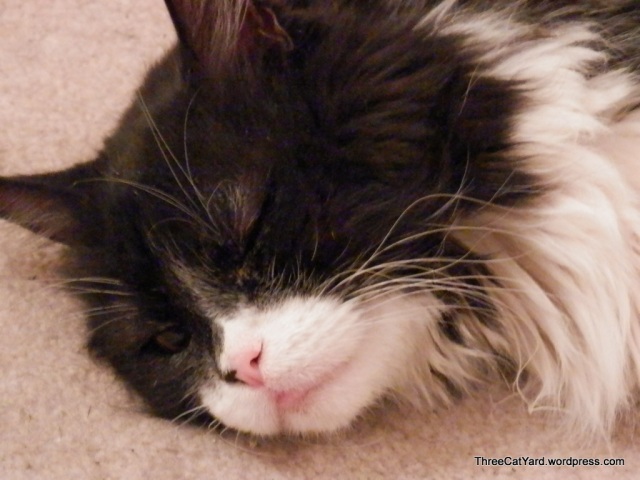 It does help, but the speeds of these pictures is still a bit low – an eighth to a twentieth of a second or so.  You have to keep the cat still and be careful yourself to avoid ruining the shot.  Still, the situation is a lot better than before, where often any shot would be dark.

In my reading I did see an interesting little gizmo that is sold that fits over the flash of a camera and uses an angled mirror that bounces the flash up to the roof.  Thus, no glare on the cat, but you do have the  light.  I don’t recall the name, partly because none of the versions would fit on my SZ. (Here it is on Amazon).

These three photos of Calla in a dim corner of the room differ only by the ISO setting of the camera.  You can see that the light level is much better with the higher ISO.

This will make things a bit ‘grainy’ relative to one with optimal light, but sometimes you have to make do.

It was a little harder to try to unmix the possible effects of more light or blurring due to slow shutter speed to see the relative effect of ISO on fine detail.  The above shots still ended up being done at the slowest speed so any jerking by the camera jerk or movement by the cat will mess things up.

My cameras actually have a mode where it tries to keep the ISO higher than normal, but can still adjust it.  I need to play with that, perhaps the flash in that mode isn’t so deadly.

2 Responses to No Squinting